Ecological conditions provide information about available resources for one’s environment. In humans, this has been shown to influence reproductive behavior, as individuals may engage in trade-offs between partner quality and investment. For instance, many women may trade-off preferences for men with physical features indicative of social dominance and health over physical features indicative of commitment and investment. The current study explored women’s preferences for formidable men under safe vs. harsh ecological conditions. Across three studies, U.S. university women (N ¼ 1,098) were randomly assigned to a perceived harsh or safe ecological condition. They were asked to rate the attractiveness of men’s body types (i.e., muscular vs. less muscular). Findings revealed that in general, women rated stronger men as more attractive than weaker men irrespective of the ecological condition. Evidence for preference as a function of ecology appeared only when a two-alternative forced-choice task was used (Study 3), but not in rating tasks (Studies 1 and 2). Study 3 showed that women had a relatively stronger preference for stronger men for shortterm relationships in a resource scarce ecological condition. This research provides some evidence that perceived ecological conditions can drive women’s preferences for men with enhanced secondary sex characteristics as a function of mating context. These findings are consistent with previous research indicating the importance of physical characteristics in men’s attractiveness, and it adds to the existing literature on ecological factors and mating preferences.

Women’s mate preferences are influenced by men’s physical features that convey indirect (i.e., genetic quality) and direct (i.e., resources acquisition) benefits (Buss & Schmitt, 1993). Assessing men who display these physical features is an evolved mechanism that is used in mate choice, as these features may signal information to women about genetic quality and potential investment in a mate and offspring (Sell et al., 2017). For instance, women have shown biases toward men’s faces that display exaggerated sexual dimorphic characteristics (i.e., masculinity) and facial symmetry (Thornhill & Gangestad, 1999). It is suggested that men with such features advertise a healthy genome (Jones et al., 2001; Scheib et al., 1999). Although research has suggested a “universal preference” for attractive physical features (Langlois et al., 2000), women’s preferences for attractive features in men may vary as a function of ecological conditions where trade-offs are made between choosing a mate with high-quality features (e.g., muscularity), over a mate who may be more willing to invest (Brooks et al., 2010; DeBruine et al., 2010; Marcinkowska et al., 2019).

An alternative perspective for environment contingent preferences suggests that ecological harshness may prompt reproductive strategies favoring high-investing partners (Geary et al., 2004; Mace, 2000). In environments with low resource availability and unpredictability, channeling resources from both parents may lead to increase survival of offspring (Kaplan & Lancaster, 2003). However, if extrinsic risk is too high (e.g., warfare, famine), parental effort in an ecologically harsh environment may not be beneficial; instead, channeling resources from parenting to mating effort may enhance fitness (Quinlan, 2007). Using resource scarcity to prime ecological harshness has shown that women favor traits associated with good-dad qualities (Lee & Zietsch, 2011). Further, women’s fear of crime is positively related to their preferences for formidable men as long-term mates, and this has been shown to not be influenced by experimental harshness manipulations (i.e., violent primes; Snyder et al., 2011). However, in safe ecological conditions, there may be fewer benefits from an investing partner, as resources have already been met and provided by the highresource environment (Little et al., 2007; Marcinkowska et al., 2019). This ecological contribution can influence reproductive strategies by engaging in short-term sexual encounters and channeling mate selection by focusing on optimal characteristics instead of high investment (Geary et al., 2004; Little et al., 2007). Research on women’s mate preferences under safe and harsh ecological conditions reveal that women prioritize masculine features for short-term mating under safe ecological conditions (Little et al., 2007). Favorable ecologies, as measured by high health and developmental indices, may influence preferences for masculine features as a function of dispositional short-term mating orientation (Marcinkowska et al., 2019). These findings are supportive of the perception that in safer ecologies, there may be fewer benefits from an investing partner, therefore, women channel their mate preference for men with desirable physical characteristics. 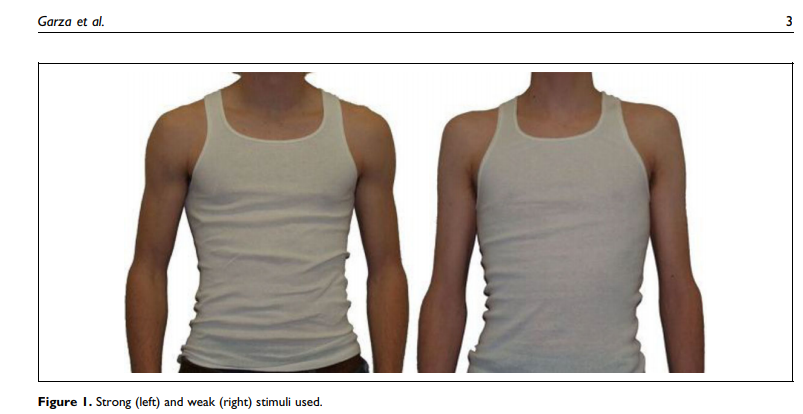 Study 2 investigated the role of mating strategy and ecology on women’s preferences for strong men. In addition to the ecological manipulation of Study 1, a slide show was used to depict a resource scarce and a violent ecology in Study 2. In addition, mating strategy was included to determine whether women’s preferences for strong men was influenced by considering them for a short or long-term relationship. Our main hypothesis was not supported. Women’s mate preferences were not influenced by perceived ecological condition and mating context. Overall, women considered strong men more attractive than weak men, regardless of mating context and ecological condition. This null result could be due to the experimental design (rating task), as it is suggested that perception of attractiveness might differ as the result of the study task where women are completing a forced-choice between pairs of men (Bartlett et al., 1960; Jones & Jaeger, 2019). Therefore, in the next study (Study 3), we used similar ecological manipulations but instead of a rating task, we asked participants to choose their preference on a twoalternative forced choice (2afc).

Men’s physical features connoting strength provides information relating to indirect (i.e., genetic) and direct (i.e., resource acquisition) benefits in mate preferences. Given these cues, women should be sensitive to these physical features and indicate preferences for them, and they should be influenced by their mating strategies and ecological cues. Consistent with the importance of physical cues in mate choice, women preferred strong over weak men, and their preferences for strong men were associated with ecological cues when using an alternative forced-choice task.

Safe: “You are single, have a university degree, and do not have any children. Your parents and siblings are supportive and you get along well with them. You live in a neighborhood that is generally safe, relatively clean, quiet and well maintained. Your neighbors are OK, either friendly or keeping to themselves. You have a stable job; as far as you can tell you will remain employed for the foreseeable future. In general, you are happy at work and get along well with your boss and co-workers. Your job provides you with a steady income that meets your needs satisfactorily. You own your own flat and are able to pay your mortgage on time. You have some savings and/or investments and look forward to a reasonably secure future.”

Harsh: “You are single and you have no children. You left school at 16 years of age, which didn’t make your parents very happy, but that didn’t really matter since you didn’t get along with them anyway. In fact, you still don’t get along with them and barely get along with your siblings. At best, your family relationships could be described as distant and at worst conflicted. You live in a neighborhood that is dirty and noisy. The community areas are not well maintained, and some areas are even dangerous. Your neighbors are generally unfriendly or keep to themselves, but a few are quite nasty and you don’t like running in to them, which is sometimes unavoidable. You recently lost your job because of a combination of economic cutbacks as well as conflicts with your boss and coworkers. You only started this job a few months ago, and so are faced with unemployment yet again. From your previous job searches, you know that work is limited and you have no idea when you will be employed again. You rent a flat that needs repairs, but the landlord has refused to fix the problems, partly because you owe back rent. And this is not the only bill that has gone unpaid.”

that appendix is a direct kick in the nuts from the authors
its beyond fucking over for weaklingcels
You must log in or register to reply here.

Blackpill Will the incel genome just die out?

Toxic Femininity Only men pay tax Men – all men – support women – all women – whether they like it or not.

Blackpill Physical Attractiveness is the Strongest Predictor of Initial Romantic Interest in Both Sexes; No Evidence Male Personality Plays Any Role for Women