I remember when I was a kid-early teens (10-14 years old approx) I really liked creepypastas about lost/haunted videogame copies or cartoon episodes, but sometimes after I went to bed at night I couldn't sleep because all I could think was of the creepypasta kek. For example Squidward Suicide creepypasta with all the description of dead kids and eerie sounds gave me nightmares. There were also some Pokemon creepypastas I liked but I don't remember the names. However I was never a part of the fandom because I didn't like the most famous creepypastas (Slenderman, Jeff the Killer, etc.) that much and the fandom was pretty autistic itself, full of socially outcast foids shipping themselves with the handsome creepypasta characters in fanarts and fanfics kek.

I met one of those foids on a facebook anime group, she messaged me because at that time I had a Slenderman profile picture because I thought it looked cool and edgy. She was weird af, she blocked me and unblocked me randomly and sometimes she insulted me on the chat, didn't talk for days and then came back "I'm sorry I acted that way". I guess indeed she was autistic or just fucked up in the head kek. 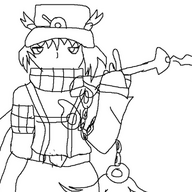 i liked the character "ticci toby" tbh ngl . i thought he was cool and i tried to dress like him.

one time on a family camping trip, some other edgy 14 year old told the story of Laughing Jack and i thought it was so cool

Was never really exposed to them. thespanishcel said:
I met one of those foids on a facebook anime group, she messaged me
Click to expand...

I remember being really into those and doing rituals to summon Jeff the killer with my stupid ass friends when I was younger, good times tbh
You must log in or register to reply here.

What do you weebcels think of Sailor Moon anime?

The term "brown people" is cringe

Serious Did you want to go Australia?