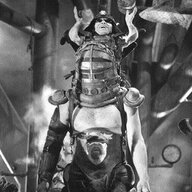 Anyone watched Stargate:Universe? There's a character on the show that's basically an incel, but the writing is actually pretty good. He's not presented as "creepy" or even bad in any way. It's actually a very sympathetic portrayal - don't think I've ever seen one like it.


His name is Eli. He's smart, but has no place in society. Dropped out of college. Stays in the house all day playing video games. No IRL friends.

The military literally abducts him. On his first day, he meets a girl who is very nice to him. He's friendly to her - going out of his way to help her, actually. She's banging chad by the end of the second episode. But Eli isn't portrayed as a stereotypical strawman of an "incel" - he's just sad about it but accepts it, which I think it much more realistic.

Later, she gets drunk and he still takes care of her - doesn't take advantage. She tells him he's a "great friend" and here again, we see disappointment and pain (that's a familiar feeling, right?) but not what I would expect hollywood to write in order to push its narratives.

Anyway, I thought it was pretty good.

nice
You must log in or register to reply here.