Understanding the basics of female nature

What is the point of understanding female nature?

Whether a male has trouble finding relationships or not, the nature of the opposite sex cannot be ignored.

You might have always heard that personality is the most valuable characteristic in men, beauty is subjective or it has little to no importance in relationships, women love men unconditionally, women are independent, men focus on looks more than women, and any type of lie that is constantly spread by society.

Average men are slowly waking up to reality. Sexless men, popularly known as incels, are only a portion of men who are aware of female nature. This awareness is increasing each day and all types of men are expected to wake up in the future.

How do females choose males?

Female nature is primarily based on reproduction. She seeks a healthy and masculine partner to breed and produce high quality offspring. Health is usually represented by extrinsic traits, such as face, body, and height. Secondary sexual traits also play an important role in attraction, such as a deep voice, a beard, a chiseled jawline, and a large penis. These traits indicate both high testosterone and fertility in males.

The female can also seek a less healthy and masculine male to provide her offspring resources. This is scientifically known as dual mating strategy. For this reason, it is not uncommon to see men who are not handsome in a relationship with quite pretty women. Which does not mean, however, that these women have permanently settled for such men. They are likely to move on from previous relationships to new ones as soon as attractive males come along.

What about childless women?

What role does personality play in finding relationships?

Personality plays a small role in finding relationships. In fact, scientific studies have shown that physical attractiveness is the most important factor in this case. Women also make judgments about a male's value as a potential romantic partner based on cues associated with facial masculinity. Another study found that physical attractiveness is the strongest predictor of initial romantic interest in speed dating.

It is the female tendency to seek high quality men who show a greater amount of resources. This also stems from an inherent biological motivation to get pregnant with the best genes possible. Pregnancy is a huge investment of time and resources for a woman, so she naturally wants the best outcome she can get. Even in recent times, with women surpassing men in educational attainment, they still desire higher-income mates.

In summary, marriage in the 21st century is a disaster. More than 50% of all marriages end in divorce. Roughly 70% of divorces are initiated by the wife. Men are likely to lose half of all their resources during the process of divorce and the child custody is given to the mother most of the time. Statistics show that marriage has become a gamble.

Why were women historically seen as inferior?

There is now evidence to suggest that women are indeed less intelligent than men. Male physical superiority is also well-documented, although self-evident. Men of nearly all cultures, societies, ethnicities, races, religions, and generations perceived women as inferior to men because they simply are. Men are responsible for nearly all major inventions and scientific accomplishments as well as artistic innovations. Civilization itself was created by men.

Women have an important role in society, yet they are not biologically equal to men.

Kaptain Kirk said:
There. So easy that even a 9-year-old can do it.
Click to expand... 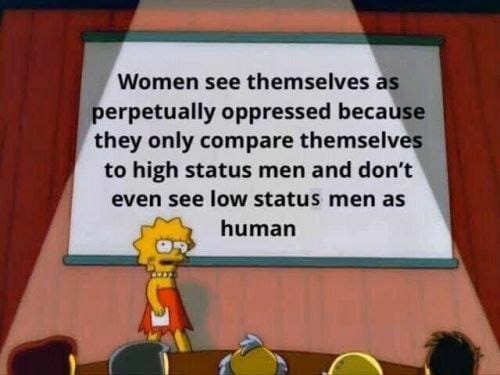 Jfl at this text wall to understand female nature
You must log in or register to reply here.

T
Discussion the definition of human matriarchy - a draft

Christians of the forum, how your religion explain the male supremacy?

Here I say the cause of feminism