Sadly this is the reality for hundreds of thousands of parents across the nation. The little girl you once held in your arms is now a beer-guzzling harlot who gets blackout drunk every weekend in an effort to chase as much penis as possible. The very though of this makes me want to upchuck.

Unfortunately, a lot of disgusting vermin, including most of Inceltears, will justify this sort of behavior. "She's just having fun!" "She can dress how you want, you're sexist!" "She's liberated, why the hate!?"

Of course, we all know this is nonsense. No one shows up to a party 90% to "just be herself". Furthermore, these vermin are removed from reality. I really doubt most of them would be saying the same thing if they ever had a little girl that they raised and loved.

This is why all fathers should shelter their daughters and teach them good values. Ik now of a couple of girls who were raised by men of integrity and therefore are leading good lives. Mothers should be cooperative as well. Any parent who encourages this sort of behavior in high school is only setting up their child to be a degenerate, STD ridden whore in the future and are therefore failing as parents.

And if you're a Father of this and try to reign your whorespawn in, you get accused of slut-shaming, misogyny and paedophilia.

How delusional do people have to be to think that these sluts are going to become the next generation of mothers? It's absolutely unthinkable. 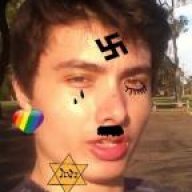 No femoid is precious.
B

Aborting femoids is the right thing to do.
Not like it matters anyway.

This reminds me that there is a great twitter about this before/after phenomenon: https://twitter.com/antesdepoisfede (before and after public college):

nothing any father can do about it, except hope she ends up ok

Red Shambhala said:
This reminds me that there is a great twitter about this before/after phenomenon: https://twitter.com/antesdepoisfede (before and after public college):

accurate. How do you feel about these losers repping communism?
B

fukmylyf said:
accurate. How do you feel about these losers repping communism?
Click to expand...

1. Marx and Engels, realizing that all serious sciences had at one time emancipated themselves from philosophy, whose once proud bag of proto-scientific goodies had been more and more emptied until nothing but a windbag full of pompous claptrap, jargon and drivel remained, wanted to do the same for the study of history. What we call "Marxism" against their will, they named "historical materialism" (history as being driven by material factors, power, by who owns and who is owned, etc.) in opposition to "idealism" (history being driven by ideas such as the notion of "there's neither Jew nor Gentile, neither man nor woman for you are all one in Christ Jesus", etc. etc.) Even if you disagree with the result, with what Marx and Engels eventually came up with, the important thing is to note that they did NOT insist on the scientific character of "historical materialism" to create a kind of crypto-catholicism no one is allowed to criticize. Like, today people often weaponize that term "science" against Christians and then say, "You cannot disagree because that's not an opinion that's science." This is not the attempt. The attempt was to create a scientific method resulting in falsifiable hypotheses: if x then y. If class struggle is like x at this point, then y [a kind of religion that glorifies asceticism and being a good slave instead of revolting] will be promoted. Obviously, every science can be developed and refined, corrected, etc. Darwin's original theory of evolution is not the same as today's theory of evolution, biologists obviously know much more about evolution, genes etc. today than what Darwin did. (Lenin himself developed Marxism by introducing this idea of an avant-garde that had to create class consciousness first, etc.) So, if "Marxism" was intended to be a science and a science something you can refine and develop, it is, of course, possible to change some of its views on women and on human biology in general. Optimism, both historical and anthropological, was arguably the only major flaw in Marx's theory.

2. Speaking about evolution: Richard Dawkins once had the genius idea of describing memes (e.g. ideas, religious and cultural norms, etc.) as cultural analogs to genes; both replicating, mutating and responding to selective pressures. Some having an advantage to replicate, some having a disadvantage to replicate. I don’t know his exact wording anymore but he says something along the lines of "turned up speakers." Teachers, college professors, journalists, "activists" and artists are essentially the "meme-replicators" of the ruling class; the latter handing the former "turned up speakers" so they replicate those (and only those!) memes the ruling class likes. And they obviously have an interest in subverting Communism. Why? Because until rather recently, the vast majority of all Westerners, no matter how Aryan or Christian both they and those ruling over them otherwise were, had been living in utmost poverty and misery for many, many centuries, despite the West eventually being the by far richest part of the world due its industrialization. Mostly because of hte workers' movement the ruling (and possessing) class  forced to share at least a bit of their riches. Now the ruling class couldn't simply rule alone anymore but had to fear strikes and uprisings, since all those without possessions (of factories, real estate, capital) had begun to organize under independently elected leaders. In their organizations, snitches, shills, concern trolls and the like were quickly removed. Out of fear of an even "worse" revolution of the non-possessing class, how it later actually occurred in Russia, the Russian REvolution, Lenin, etc., the so-called "welfare state" came into existence: old-age pensions, accident insurance, employee health insurance, high-tariff policies to protect profits and wages from foreign competition, the 38-hour-week and the weekend itself. All according to the idea of "sacrifice a part to save the whole." This part the ruling class is now about to take back, and hence a "middle-class" will soon not exist anymore:

Subverting socialism and turning it into that blue-haired feminist BS we see today is obviously important. But this just didn't happen over night, this begun in the 50s and 60s with a carrot and stick policy; sticks against "radicals" (McCarthy in the US, in Europe they wer eforbidden to become teachers etc.) and the integration of "liberals" into the system (who started working for the state, became teachers, joined the parliaments, etc.). So instead you get this kind of rainbow capitalism with gender quotas, female CEOs, transsexual mercenaries etc.

hand me the flamethrower

Imagine sending your son to college to become a worthless incel who browses an obscure forum and complains about girls becoming hot stacy/sluts while he rots in a room with no hope whatsover.

NekoStance said:
She'll be gone 17 - 23 around, i.e. prime carousel years
nothing any father can do about it, except hope she ends up ok
Click to expand...

The only way to make sure she doesn't lust for Chad is to have her circumcised.

incelman said:
Imagine sending your son to college to become a worthless incel who browses an obscure forum and complains about girls becoming hot stacy/sluts while he rots in a room with no hope whatsover.
Click to expand...

NegroKing said:
How delusional do people have to be to think that these sluts are going to become the next generation of mothers? It's absolutely unthinkable.
Click to expand...

This sis also a very disturbing thought. These beer-guzzling harlots will ACTUALLY BE REPONSIBLE FOR RAISING CHILDREN. Disgusting and depraved thought.

ItheIthe said:
This sis also a very disturbing thought. These beer-guzzling harlots will ACTUALLY BE REPONSIBLE FOR RAISING CHILDREN. Disgusting and depraved thought.
Click to expand...

may Allah grant us revenge
W

NekoStance said:
She'll be gone 17 - 23 around, i.e. prime carousel years
nothing any father can do about it, except hope she ends up ok
Click to expand...

The only way to make sure she doesn't lust for Chad is to have her circumcised.
Click to expand...

She will always lust for him.
It's biological.
What used to prevent or at least contain it somewhat in the past, were the social norms that condemend slutiness.
Today it's enforced. The younger they start and the more men they have fucked, the higher their ingroup standing will be, while ofc denying it to everyone outside in order to abe able to get some beta orbiter down the line who would be otherwise disgusted to know that "his girl" fucked 200 guys before turning 20.
You must log in or register to reply here.

A
Venting Pakis are not curries
2

What do you think of my social system idea?