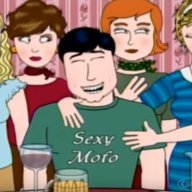 I requested my own ban, I don't remember who it was I requested from, it happened in the chat room back when this was .me
It was several months ago. It wasn't over anything serious in my opinion, I had a post removed for foid worshipping, but ironically I was taken out of context because I was describing why I'm suck a broken guy for feeling like a weak loser, I can see how it appeared to be foid worshipping but the post never expanded or had any exploration to what was going on with me that day, it was simply removed direct. But either way I didn't react well so I went in the chat and asked that Mod if he removes my post then he might as well just ban me. I formally requested the ban, and so he did.

The reason I want to be unbanned is because this is really the only place on the internet where real people I can relate to speak about the exact same stuff I live and understand. I've never used Facebook, reddit, or social media, and the only alternative might be that slayers.net and that's not really the same...
I don't fit in anywhere else really.
I'm a bit older and I take a hiatus once in a while from shitposting, but I just feel like there so much to learn by contributing as well, instead of only lurking.
Please and thank you

@AmIjustDreaming and myself are the two newest mods on the forum so if you need any help, do not hesitate to call on us.

Oh and it was senior moderator

i_a_m_I that gave you your requested ban long ago.